History of St. Bridget of Sweden

St. Bridget, also known as St. Birgitta, is the patron saint of Sweden, as well as co-patron of Europe alongside St. Catherine of Siena and St. Teresa Benedicta of the Cross. Her feast day is July 23rd. 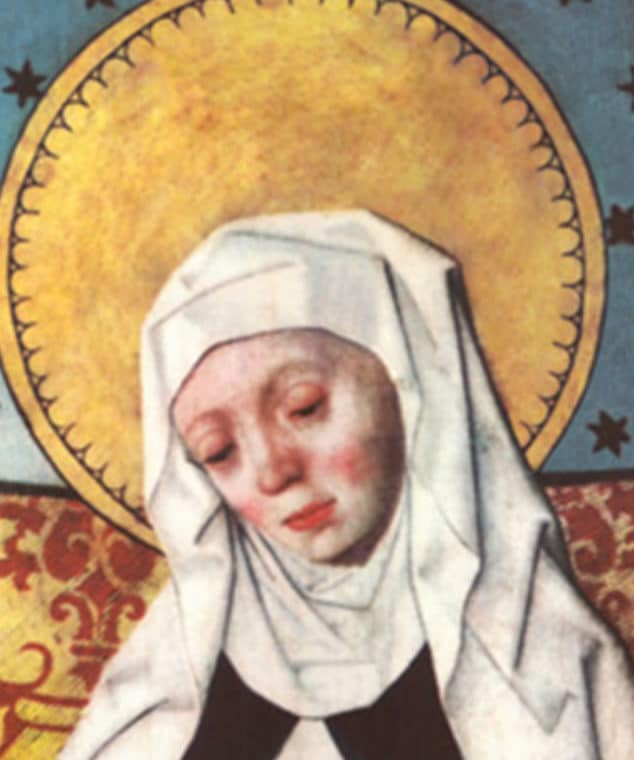 St. Bridget was born into a wealthy and devoutly religious family in Uppland, Sweden in 1303. When she was a child, she had a dream-vision of The Man of Sorrows—an image of Christ with his wounds from Good Friday as depicted in Isaiah 53. When she asked Jesus who had hurt Him, He replied, “Those who despise me and refuse my love for them.” Throughout her life, St. Bridget continued to have a deep relationship with God, which included additional visions of Jesus.

In 1316, at the age of 13, St. Bridget was wed to 18-year-old Ulf Gudmarsson. Together, they had eight children, including a daughter who would go on to become St. Catherine of Sweden. Between 1341—1343, the couple made a pilgrimage to Santiago di Compostela, home of the Spanish Cathedral where St. James is buried. On their return trip, Ulf became quite ill, forcing them to stop in France. As St. Bridget prayed at Ulf’s bedside, a bishop comforted her, saying that Ulf would regain his health and “God had great things for her to do.” Ulf regained his health and the couple returned to Sweden. But shortly after their return home, in 1344, St. Bridget’s husband died. Following Ulf’s death, she donated all of her belongings and devoted her life to Christ.

After the death of her husband, God spoke to St. Bridget and she followed His call for her to start a new religious order. In 1346, she founded the Bridgettines, also known as the Order of the Most Holy Savior. The Latin translation is Ordo Sanctissimi Salvatoris, abbreviated as O.Ss.S. Pope Urban V approved her congregation in August 1370.

With the help of King Magnus of Sweden, the Abbey of Vadstena would become the home of the Brigittine Order. This was the first monastery for both women and men. Monks and nuns resided in separate areas but used the same chapel. Because the order was primarily for women, the person in charge was the abbess. The function of the monks was to provide spiritual direction for the nuns.

Unfortunately, St. Bridget never saw the completion of Vadstena. In 1349 God called her to go to Rome and remain until the pope returned from Avignon, France to Rome. Between 1309—1376, seven popes lived in Avignon instead of Rome due to the conflict between the papacy and the French crown. St. Bridget was unsuccessful in persuading the pope to return to Rome. Because of her inability to finish many things in her lifetime, she is known as the patroness of failures. Like St. Jude, we can turn to St. Bridget when we are in need of hope.

St. Bridget died in Rome in 1373. In 1391, only eighteen years after her death, she was canonized by Pope Boniface IX. In 1346, St. Bridget’s daughter, Catherine, came to Vadstena where she was later named abbess. After St. Catherine’s death in 1381, the abbey was blessed by the Bishop of Linköping in 1384. The Bridgettines are still active today with monasteries throughout Europe. Currently, eight nuns live in Vadstena.