History of All Saints Day

All Saints Day, also referred to as All Hallows, is a holy day of obligation celebrated on November 1st in honor of all saints and martyrs throughout Christian history, known and unknown. 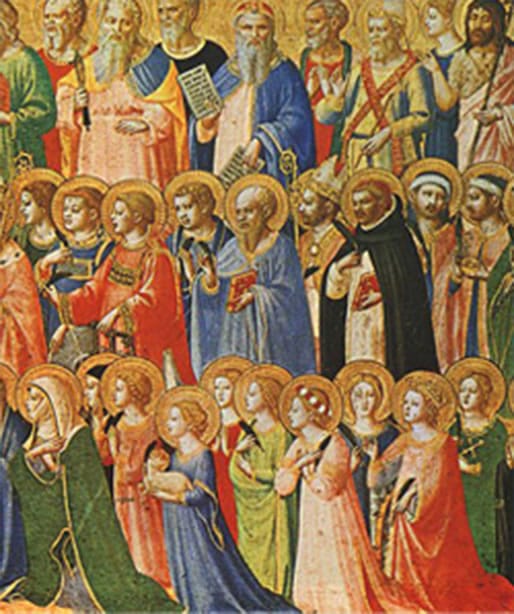 This holy day started when Pope Boniface IV buried the remains of Catholic martyrs beneath the Pantheon in Rome because robbers had been stealing them from the catacombs. Originally a temple for all of the gods, Emperor Phocas gave the Pantheon to Pope Boniface IV who rededicated it as Santa Maria ad Martyres (St. Mary and All Martyrs) in 609 AD. Pope Gregory III dedicated a chapel in St. Peter’s Basilica in Rome for Catholic saints, apostles, martyrs, and their relics in the mid-eighth century, and officially affirmed All Saints Day to be celebrated November 1st.

While every canonized saint has their own feast day, All Saints Day is the celebration of all Catholic Saints, including those we may not know about. It is also a time to honor those saints who, like St. Jude, have interceded for us in times of need.

The Gospel reading for All Saints Day is Matthew 5:1—12, which contains the Catholic prayer of The Beatitudes.

The day before All Saints Day is All Hallows Eve (Halloween), October 31st. During the Middle Ages, beggars asked for “soul cakes,” and in exchange for the pastry, the recipient would pray for the souls of all those who have died. Halloween is mostly secular in the United States, as children dress up in costumes and go trick-or-treating for candy in their neighborhoods.

Customs for All Saints Day vary by country. In Eastern Europe candles are lit at the gravestones of loved ones. Flowers are more common in Western European countries. In the Philippines, not only are flowers brought and candles lit but family members also clean and repair the graves of their deceased loved ones. The theatrical play “Don Juan Tenorio” is performed in Spain, Mexico, and Portugal on All Saints Day, and families make offerings for their loved ones. November 1st is also Día de los Inocentes (Day of the Innocents) in Mexico, which honors children who have died. Swedish customs dictate that All Saints Day is celebrated on the first Saturday of November, while in Eastern Orthodox churches, All Saints Day is celebrated on the first Sunday after Pentecost and is called All Saints Sunday.

All Saints Day is not to be confused with All Souls Day, which is held the following day, November 2nd. All Souls Day is not a holy day of obligation and recognizes the faithful departed who have left their earthly lives but have not entered the kingdom of heaven.

All Saints Day is a day to recognize the exceptional spiritual intercession of the saints in our lives. We honor their contributions and sacrifices to the Catholic faith and recognize that we share a communion with Christ. It is estimated the Catholic Church has canonized more than 10,000 Saints.